We find there is a lot of confusion amongst installers and trades about how these systems are wired up. Largely this is caused by the fact that these speakers are not wired in the traditional way low impedance or home hi-fi speakers are. In fact, it may seem completely counter intuitive!

If you look at the traditional home hi-fi system, you have a single output connected to a single speaker. In some cases your amplifier might even be able to power two pairs of speakers from a single output, but any more and most amplifiers cannot handle the impedance load. This is because as more pairs of speakers are added to a circuit, the impedance drops, the further it drops, the more load the amplifier is under to power the speaker.

To get around this problem, the 100V line system is wired up completely differently and each speaker is fitted with a transformer on the back of it, this isolates the speakers impedance load from the amplifier. The transformer can be set to a wattage rating, allowing for independent volume level for each speaker. The net result is a 100V line system allows for long ‘strings’ of speakers to hang off a single amplifier output, each speaker is connected to the next one in the circuit by daisy chaining the wiring. See figure below.

A 100V line speaker is operated by applying 100V RMS from the amplifier to the speaker step down transformer via suitable figure 8 cabling. This stepdown transformer then converts the 100 Volts down to a standard speaker level to output audio.

In the case of fire & evacuation speakers, these have an additional requirement of “line monitoring” which is provided by the addition of a bipolar capacitor in series with each speaker transformer. This capacitor allows a line monitoring unit to measure the speaker circuit for ‘normal’, ‘open’ or ‘short circuit’ conditions. For more information, see our guide on ‘What is Line Monitoring?’.

Connecting Multiple Speakers or ‘How much load is on my 100V circuit?’

Sometimes of course, you may turn up at an installation that was done years ago, and you have no idea how many speakers are installed or what power taps they have been set to. In this case you will need to resort to measuring the AC impedance of the speaker string.

Importantly, this differs from DC resistance that most multimeters offer as a standard range setting. To measure the AC impedance you will need a dedicated impedance meter such as the Redback Q 2001.

Using the table below you can easily work out the system load for a measured 100V impedance. 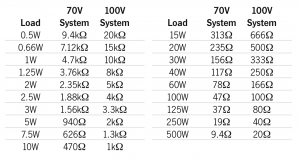 The connection of two way or four way terminal blocks is essentially identical. Simply positive and negative input from the amplifier. However a four way terminal block is a requirement of the Australian fire & evacuation regulation. Essentially it allows for easier loop in, loop out daisy chain wiring without having to put two cable conductors into the one cable entry.